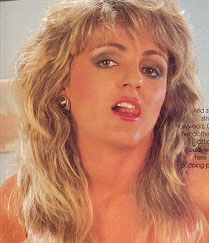 Very busty, usually blonde model/dancer/porn star - made several appearances in Gent during the early 90s under this name.

Becomes Melissa Mounds - see entries under that name. Was a frequent Covergirl and/or CF and appeared in all the major boob titles from the late 80s to late 90s