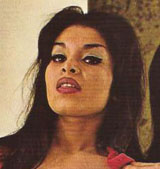 Exotic looking beauty w/ black hair who appeared in numerous PN slicks in the early - mid 60s. Variously billed as Persian, Armenian, Algerian, sometimes Spanish or something similar. Last name 'Itano' is from an ad in Shiek v1 #3 which has a 2 pg ad for 8mm movies. Also appeared under a variety of other names inc Carmen, Gina, and Tina Karkurian.