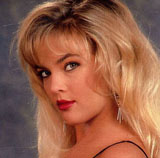 Was Penthouse Pet of the Month for 5/90. Was Pet of the Year for 1992 under the name Brandy and had several other apps in Penthouse using that name.

Also appeared in Club, Club International (a regular monthly feature from 10/90 - 12/91) and Swank as Giselle. Was a regular feature in British editions of Club as 'Ginny'.