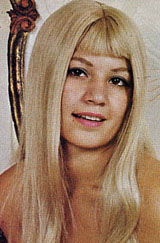 Busty model was a regular in Challenge Pubs and PN slicks from 1972-1974. Appeared under a variety of names and as both blonde and dark haired. Sandy Mayer is from Night & Day 3/72 with FC + 8 pgs inc CF. The same month she was also covergirl w/ 9 pgs for Men's Digest.

There is also a very nice feature in TOP HEAVY #7 where she is called Brandy Vega.

And in case that's not confusing enough she is also apparently known as Sherry Hague although I cannot trace the origin of that name.