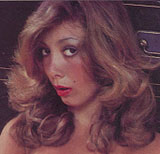 Was in MAYFAIR v14 #9 as Carol Williams and is apparently well known by that name.

Also regularly appeared in a number of PN type slicks - often w/ only a first name or none at all. Was Featured on FC, CF and large pictorial in BUSTS+ v2 #3 and FCs of Mother Jugs v1 #1 and Tit Man v5 #4 and the BC of Whoppers v2 #3.