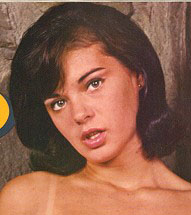 Popular model from the early 70s. Another girl who had a different name every time you saw her. Although her natural hair color is dark she did extensive modeling in a blonde wig with braids - often under the name Marlene. Was a frequent Covergirl and/or CF.

Because there are so many diff names to choose from I have listed all of her apps under the name Eve Bowers.


Currently, there are no listings in this category. Check back soon for new additions!