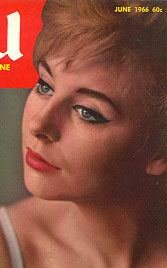 Busty blonde British model popular from the mid 60s to early 70s. Was Covergirl and featured in BEAU v1 #1 (4/66), Covergirl w/ pictorial in MODERN MAN 1/63 and Covergirl of PN mag KINGSIZE v1 #1 (1970). Also appeared in GEM 1/69. Also known as Chris Carter but most of her apps I've found have been under the name Gina Graham. Was married to photographer Ken Williams and may also be known as Chris Williams.