Appeared under a variety of names but Eve Bowers is from Modern Man 1/70 w/ FC and CF feature. This particular feature has photos of her as both a brunette and w/ the blond braids. However, Modern Man Special #60 lists her as Alice Adams. That name was also used in PIX 11/71.

But just to keep things interesting PIX 10/73 w/ FC & pictorial has her as Marlene Blair, and that ID is also used in Tiger #28.

We're not done yet. She also appears in FOLLIES 2/72 as 'Sheila Farmer' as a blonde but no braids and is the Covergirl w/ 6 pgs for Man's Pleasure 8/77 as 'Sherri'.

She is also known as Marlene Wooden (please see that name for additional information and listings), Marlene Blair and Marlene Stively (Stivily) 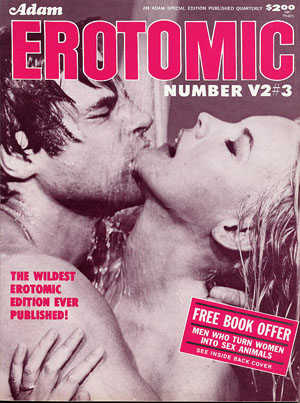 Product ID: adam-erot-v2.3c
Big squarebound edition contains an unknown issue of ADAM (probably 5/74) plus "The GIRLS" 1974 wall calendar and KNIGHT v10 #4 (4/74) all bound together minus the original covers of the magazines. Bright & glossy, lightly read - FINE