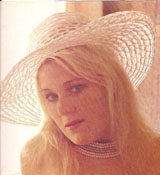 Busty blonde model from the late 70s - early 80s who appeared in all the major titles and numerous PN slicks. Another model who had a different name almost every time you saw her. Lana Cole is from her CF appearances in FLING 1/79 & 11/80. She was Donna in SQUIRE 12/78, Donnie in GEM 8/79 and La Donna in GENT ANNUAL 1978. Was Covergirl w/ pictorial in CAPER 12/79 as Pam. One particular photo shoot of her in a white corset and hat was reprinted numerous times in many diff mags.

I am unable to trace the origin of this ID - apparently is of European origin. Please see listings under Lana Cole.