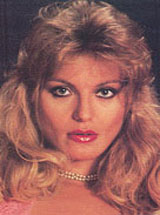 Busty blonde model from the late 70s - early 80s who appeared in scores of mags under almost as many different names, often anonymously or under a first name only. Was Covergirl & CF of HIGH SOCIETY 2/79 as Lorie Armbrust and appeared in several more issues of that title thru 4/83. Also a regular in (HIGH SOCIETY) LIVE. A frequent Covergirl and/or CF who was in nearly every major mag from that time frame including FCs for Escapade 1/80 and Squire 8/79, CFs in Gentleman's Companion 5/80 & Knave 7/79, as well as a number of PN slicks.