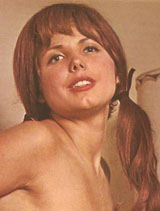 Cute model with reddish hair in trademark braids. Featured on FC of MODERN MAN 4/66 and was CF of ROGUE 11/66 as Stephanie Hallow. Appeared in numerous mags but always w/ a different name. Was CF of Adam v10 #5 as Trippi Skipington.

There is also a model from the same time frame who looks very similar but does not have her hair braids. Billed under a variety of names, Sheila Grayson & Dorinda Bernard seem to be most common, I've been told this is the same girl as Trippi but have no conclusive evidence so I have kept those listings separate. Please see listings under Sheila Grayson for the girl without braids. 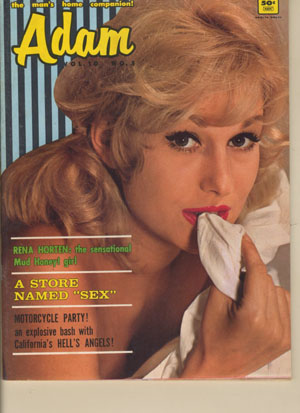 Product ID: adam-v10.05c
5/66 - Rena Horton has close-up FC + 6 pgs of pics from movie 'Mud Honey' also starring Lorna Maitland. Trippi Skipington (aka Skepington) has 4 pgs inc CF. French stripper Sophie Rieu has inside FC + 4 pgs, Kim Conway has 4 pgs and Nancy Kovack has BC + 2 pg (was in movie 'The Silencers' w/ Dean Martin). The One Percenters - an article about bikers and Althea Currier letters column. Plus fiction by Earle Schell 'Such Revenges On You Both' & Jack Ritchie 'The Id of Irving' and Part 4 of 'The Satyricon' by Petronius. Very bright & glossy, lightly read - FINE
Read More...
Number in Stock: 1
Price: $30.00