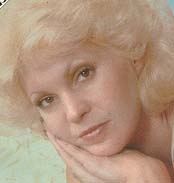 Platinum blond model with short curly hair from the early 80s with numerous appearances in many major titles including BUF, FLING, GEM, & GENT as well as numerous PN type slicks.