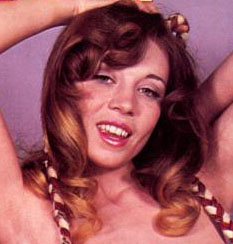 Busty Brunette model with medium length hair, popular during the 70s. A frequent Covergirl and/or CF who appeared under a variety of names. Was CF of ADAM 11/72 as Cory Beaumont, again in 10/73 as Jane Roberts, Covergirl of MAN'S DELIGHT 2/78, Covergirl & CF of MODERN MAN 10/72 also as Jane Roberts.

Also appeared in many PN slicks, often anonymously or with just a single name. Was covergirl of KINGSIZE v4 #4 and TOP HEAVY v1 #4.